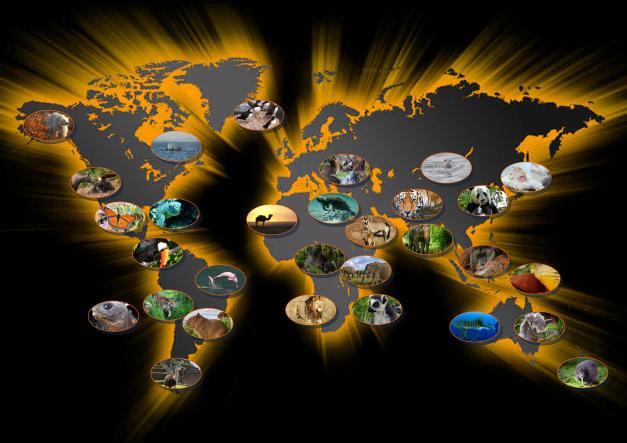 There is something about a wildlife encounter that is truly engaging for travellers, whether its birding out in wetlands, watching bears from a hide, swimming with manatees, feeding baby Pandas, having breakfasts with orang-utans or spotting big game while on safari.

When talking about wildlife touring most people automatically think of Africa – and it is a reasonable jump – but there is all sorts of wildlife sightseeing out there available to the traveller looking to enhance their journey. As you can see from the above map there are locales all round the world that offer fantastic and unique wildlife encounters.

Lets just take a look at one region to start with .. the Middle East, one of the few places people think of travelling for Wildlife Sightseeing. From Persia through to Morocco there are some fantastic Wildlife sightseeing and visitations able to be done in this region and here are a few examples..

END_OF_DOCUMENT_TOKEN_TO_BE_REPLACED

“Those Heroes that shed their blood and lost their lives .. You are now living in the soil of a friendly country, therefore rest in Peace. There is no difference between the Johnnies and the Mehmets to us where they lay side by side, here in this Country of ours … You, the mothers, who sent their sons from far away countries, wipe away your tears, your sons are now lying in our bosom and are in peace. After having lost their lives on this land, they have become our sons as well!” Ataturk, 1934

Lieutenant Colonel Peter Sweeney RFD (Retired) joined the Australian Army Reserve (Infantry Corps) as an Officer Cadet in 1966 and served, raising through the ranks until he officially retired as a Lieutenant Colonel in 2000. He has received a number of Awards and Commendations during his service, and during his service and since retirement has travelled to a number of Historical Battlefields across the world including Gallipoli, Islawanda, Rorkes Drift, Pearl Harbour and Normandy to name a few. Today Peter is a Gallipoli Specialist and member of the Guild Of Battlefield Guides (UK).

We have been incredibly lucky to have Peter ask to lead two great departures to Gallipoli in 2015 – the year, 100 years on from when the ANZAC Forces landed in the Dardanelles during World War I.

11 days, Australia to Australia, we spend a brief time in Istanbul before heading down to the Dardanelles for an in-depth look at the battlefields of the Gallipoli Campaign. From Lone Pine and Chunuk Bair, where the Australian and New Zealand Forces were stationed. To Kabatepe, and the Turkish positions, to the French area of operation in Cape Hellas to Sulva Bay in the North where the British Landed.

We have 2 fantastic departures, one in July and one in October, for more information, read on ..

END_OF_DOCUMENT_TOKEN_TO_BE_REPLACED

ANZAC Cove, where the ANZAC Day Dawn Services are held is not the landing point of the ANZAC Forces. The actual landing point was a short way up the Peninsula and was a much steeper point along the cliffside

In 2015 we commemorate the 100th Anniversary of the landing of the ANZAC (the Australian & New Zealand Army Corps) forces at Gallipoli, on the 25th April in 1915 during World War 1.  The Campaign at Gallipoli was one the first battlefront and theatre of war that Australians had participated in during World War I, the first conflict we had entered as a united nation.

While Australians as members from individual states, and eventually a united federation, had fought in South Africa during the Boer War, and while as many Australians, and New Zealanders for that matter, died in any number of single battles on the Western Front in a single day as died during the entire Gallipoli Campaign, it was the Gallipoli Campaign that began to solidify the image of what it meant to be an “Australian” both to the Australian people, and to those elsewhere in the world.

Battlefields Of The World have been providing quality battlefield tours for over a decade, have led ADFA Study Tours through France, have organised Veteran Return visits to Vietnam, Singapore and more. We are proud to announce that with their assistance we will have one dedicated departure in 2015 to help people attend the 100th Anniversary of the Gallipoli Landings. For more information .. read on!