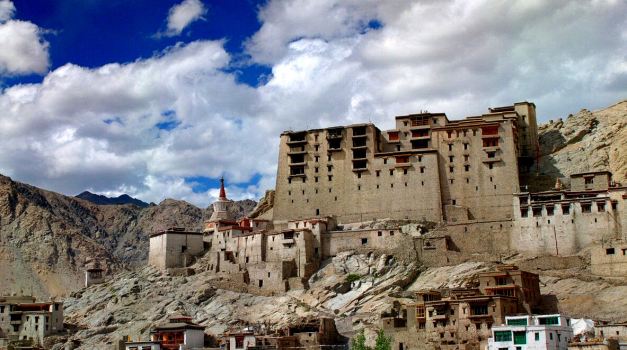 The ancient city of Leh

Day 02  – In Delhi
The bustling capital of India with over 1300 historical monuments. We’ll have a look at the Red Fort, past home of the Indian emperors; the Qutub Minar complex that contains what was once the world’s tallest tower (built about 1199AD) and a prehistoric iron pillar that never rusts; the Jantar Mantar, an odd set of stone constructions built in 1724as an observatory, the Crafts Museum with its exhibition of the living culture of rural India; and Humayun’s Tomb, the extensive mausoleum of the second emperor of India that is a prototype for the Taj Mahal

Day 03  – Delhi to Shimla
We take a mainline express north to Kalka and then transfer to the narrow gauge train that wends its way up through the Himalayan foothills  through 20 railway stations, 103 tunnels, 864 bridges, and 919 curves.

Day 04 –Shimla Sightseeing
Shimla was the British capital in summer when temperatures on the plains below were over 40 degrees Centigrade. We’ll wander the pedestrian-only Mall, visit the former Viceregal Palace, explore the markets and take it easy.

Day 06 – Mandi to Manali
Our drive takes us along side the mighty Beas River and into the Kullu Valley, also known as the Valley of the Gods. The valley is renowned for its beauty and is prime agricultural land.

Day 07 – In Manali
A day of sightseeing and getting used to the higher altitude (2050 metres) before we go even higher.  We’ll have a look at the Hindu Dhoongri temple set in a pine forest and in comparison the brightly coloured Gelukpa Cultural Society Gompa(Buddhist temple) with its atmospheric prayer room crammed with statues of Buddhist deities and gurus. There is also the Museum of Himachal Culture &Folk Art with household and religious artifacts, weaponry and woodcarving on display.

Day 08 – Manali to Keylong
This is where the scenery starts to become really interesting as we zigzag endlessly uphill to the Rhotang Pass (3978 metres) translated literally as ‘pile of corpses’. This pass is a watershed both climatically and culturally. From the pass we descend by many hairpins into the Lahaul Valley and our hotel in Keylong.

Day 09  – Keylong to Sarchu
Yesterday was tame compared to today’s scenery. We leave the clouds behind and deep blue skies backdrop the crystalline white peaks of the Himalayan ranges. This is beauty beyond belief. During the day we cross the Baralacha another pass at  4890m and motor down to 4030m at Sarchu where we stay overnight in luxurious tented accommodation. Just think, some people cycle this route.

Day 10 – Sarchu to Leh
Just wait until you see today’s scenery, wide high altitude valleys, river gorges, the Lachalung pass at 5059metres and another, the Taglangpass at 5359 metres. This used to have the world’s highest toilet until one was built on the higher Khardung La, north of Leh. From the Taglang we swoop down into a side valley off the great Indus valley. The vertical rock formations alternate between red and green layers and we see the first settlements since Keylong.  The green strip of the Indus valley contrasts markedly with the sandy color of the surrounding high altitude desert.

Day 11  – In Leh
A day of rest after all that travel. You are free to wander this quite extraordinary town in a region known as Little Tibet due to its affinity culturally and geographically with next-door Tibet.

Day 12  – In Leh
A day of sightseeing around Leh with an early morning visit to the puja (worship) ceremony at the Buddhist Thiksey monastery followed by visits to Shey and Hemis monasteries.

Day 13  – Leh to Lamayuru
We follow the Indus down river pausing to gaze at its tributary the ZaskarRiver, which emerges out of a gorge. This is an area of military camps as the borders with Pakistan and China are not far away. As we climb towards Lamayuru we pass the moonland landscape. This is the bed of a former glacier-dammed lake that has been eroded into other-worldy shapes. Lamayuru monastery, atop a ridge and surrounded by a medieval village, is one of the oldest and largest monasteries in Ladakh

Day 14 – Lamayuru to Kargil
Our drive continues following the Indus valley, a climb of the Fotu pass (4108 metres) and a stop in Mulbek. This place is unremarkable except for the 9 metre-high statue of the Maitreya or future Buddha. We stop overnight in Kargil and find another cultural change for this is a Muslim town.

Day 15 – Kargil to Srinagar
We drive on to Srinagar and the beautiful Kashmir Valley. Our accommodation is a luxurious houseboat, on Lake Dal, full of wood carving and plush Kashmiri carpets.

Day 16  – In Srinagar
A day of local sightseeing and a shikara(boat) ride on Lake Dal. If we can get up early enough there’s an opportunity to see the dawn floating market.

Day 17 – Srinagar to Patnitop
We drive back into Hindu India visiting the Jammu part of Jammu and Kashmir that not only incorporates Muslim Kashmir but also Buddhist Ladakh. Hopefully just outside Srinagar we can watch cricket bats being made by hand and view the crocus fields that give us that rare spice, saffron. We return back down in the foothills of the Himalaya.

Day 18  – Patnitop to Kangra
Leaving Patnitop initially by road we transfer to the Kangra Valley railway, another narrow gauge train that ambles through the countryside. It’s a chance to see something of rural northern India and chat to the locals. We transfer to Pragpur and stay at the beautiful heritage hotel, Judges Court.

Day 19  – Pragpur to Mcloedganj
McCleodGanj is the home of the exiled Tibetan religious leader, the Dalai Lama. It also home to thousands of Tibetans who have subsequently fled Tibet since the Chinese occupation.

Day 20 – At McCloedGanj
We visit the nearby Norbulingka Institute that is dedicated through teaching to preserving traditional Tibetan arts and crafts.  Afternoon at leisure in McCleodGanj.

Day 22  –Amritsar
We visit the beautiful and peaceful Golden Temple, so named for the pure gold roof of its holy of holies. We can visit the langar (food hall) and enjoy the free but simple meal that is prepared day round for the hundreds of pilgrims who visit the temple. In the afternoon we drive to Attari, which is the Indian side of the border with Pakistan. As the sun goes down we watch the surreal closing the border ceremony conducted in mirrored harmony by the tallest soldiers from each side.

Day 23 – Amritsar to Delhi
We return to Delhi by train

Day 24 – Delhi
A day for shopping before flying home