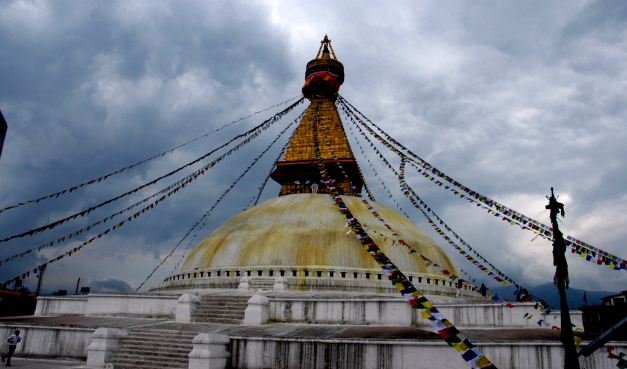 Day 1: Arrival Kathmandu
Arrival and transfer to hotel. PM – Sightseeing of Swyambhunath, one of the world’s most glorious Buddhist Chaityas, said to be 2000 years old. The Chaitya, which forms the main structure, is made of a solid hemisphere of brick and clay supporting a lofty conical spire capped by a pinnacle of copper gilt. Painted on the four sides of the spire bases are the all-seeing eyes of Lord Buddha. It is three kilometres west of Kathmandu City, and situated on a hillock about 77m above the level of the Valley. This hill is a mosaic of small Chaityas and pagoda temples. Overnight at Hotel Himalaya.

Day 2: Kathmandu – Pokhara
Breakfast at hotel. Transfer to the domestic airport and fly to Pokhara. Upon arrival at Pokhara, transfer to hotel and check-in. The Pokhara Valley is one of the most picturesque in Nepal. Lakes Phewa, Begnas, and Rupa enhance the beauty of the valley, which have their source in the glacial region of the Annapurna Range of the Himalaya. Pokhara is one of the few places in the world to provide such a dramatic view in a sub-tropical setting. Machhapuchhre for example, is only 28 kilometres from Phewa Lake, and not a single mountain range intervenes between the two. Pokhara’s numerous lakes, known as “Tal” in Nepali offer fishing, boating and swimming. AM – Sightseeing of Pokhara. PM – Hike to the Peace Stupa on the southern end of Phewa Lake, reachable by boat and then climb up the hill. The view of Pokhara, Phewa Lake and the Annapurna range is breathtaking. Overnight at Hotel Trekotel.

Day 3: Pokhara – Ghandrung (1940m)
Breakfast at hotel. Drive to Nayapul from Pokhara and start the trek. We walk about half an hour to Birethanti and take the right-hand track and walk on a gradual ascent through villages to Seuli Bazaar for a lunch stop. Post lunch also sees a further gradual ascent on a very busy trail for about 3 hours which takes us to the large Gurung village of Ghandrung.  Here there are magnificent views of the mighty Himalayas including the famous Mt. Machapuchre, Annapurna South, Gangapurna, Annapurna 1 and other peaks of Annapurna range in the east. The major residents of the Ghandrung village are those retired from British and Indian Army. We can explore the village should  time permit. Walking time: 6 hrs

Day 4: Ghandrung – Ghorepani (2860m)
A day of pleasant walking through rhododendron forest. During  April and May we can see the rhododendron in full bloom. We stop for lunch at Tadapani. A one hour up-and- down hill walk will see us at Banthanti a small village. Then our trek gains gradual height through forest to Deorali, which offers spectacular views of the majestic Himalayas such as Dhaulagiri, Putha Hiunchuli, Tukche Peak, Larjung Himal and many more. Our trail eases from here until Ghorepani. Overnight at Ghorepani. Walking time: 7 hrs.

Day 5: Ghorepani – Tikhedhunga (1540m)
Today early in the morning we climb Poon Hill to enjoy the better views of the aforesaid Himalayas and come down to Ghorepani for breakfast. We take return journey to Pokhara walking on a down-hill track through forest and sparsely habited village of Nayathanti then onto Ulleri for lunch stop. Post-lunch we walk on a steep descent throughout to Tikhedhunga on stone-paved path. Tikhedhunga is the place for last night’s stay of our trekking, situated on leveled land. Walking time: 5 hrs

Day 6: Tikhedhunga – Nayapul – Pokhara
Today we will have an easy walk on flat farmland throughout via the villages of Hille, Sudame, Lumduwali etc to Birethanti and stop for lunch. Post lunch a walk of approximately an hour which will take us to Nayapul where our trek ends and we drive back to Pokhara. Walking time: 4 hrs. Upon arrival at Pokhara, check in at hotel. PM – Free. Overnight at Hotel Trekotel

Day 7: Pokhara – Chitwan
Breakfast at hotel. After breakfast depart for Chitwan. The main attraction of Chitwan is the Royal Chitwan National Park, which is situated 120 kilometres southwest of Kathmandu. This is one of Nepal’s largest forest regions, with a wide range of wildlife—the rare great one-horned rhinoceros, several species of deer, sloth bear, leopard, wild boar, fresh water dolphin, crocodile, more than 350 species of birds, and the elusive Royal Bengal Tiger. Arrive at Safari Narayani Lodge followed by refreshments and a briefing about the afternoon programme and the Lodge facilities. 1300 hrs: Lunch at the central dining restaurant 1500 hrs: A talk on the elephants by our naturalist at the elephant stable. 1600 hrs: Jungle safari on elephant back. An excellent opportunity to see four different kinds of deer, rhinoceros, wild boar, leopard, monkeys, birds and many other smaller animals. 1830 hrs: Talk on the natural history & flora & fauna of the National Park. 1930 hrs: Dinner. Overnight at Safari Narayani Lodge.

Day 8: Chitwan
0600 hrs: Wake up call. Tea/Coffee. Second Jungle Safari on elephant back through another section of the Royal Chitwan National Park. 0730 hrs: Breakfast. 0830 hrs: Dugout canoe ride along the Rapti river. A good opportunity for bird watching and to see the two rare species of crocodile, the marsh mugger and the fish eating gharial.  Half an hour walk through the jungle to the Elephant Breeding Farm. Drive back to the Lodge. 1300 hrs: Lunch. 1530 hrs: Nature Walk: An excellent opportunity to be familiar with the diverse vegetation of the Park and to see a great many of those over 500 different species of birds which have made Chitwan their home. 1830 hrs: Tharu Tribal Dance presented by the local Tharu villagers. 1930 hrs: Dinner. Overnight at Safari Narayani Lodge

Day 9: Chitwan – Kathmandu
After breakfast leave for Kathmandu. Total distance is about 150 km covered in about 5 hours.  PM – Sightseeing of Patan & Boudhnath. The ancient city of Patan is situated on the southern bank of the river Bagmati. The city is full of Hindu temples and Buddhist monuments with bronze gateways, guardian deities and wonderful carvings. Noted for its craftsmen and metal workers, it is known as the city of artists. Patan Durbar Square, situated in the heart of the city, constitutes the focus of visitor’s attraction. The square is full of ancient palaces, temples and shrines, noted for their exquisite carvings. One can rummage for treasures in the various shops around the square. A little further from Patan Durbar Square lies Mahabouddha. This Buddhist temple made of clay bricks in which cotta structure is one of the fourteenth century Nepalese architectural masterpieces. Hiranya Varna Mahavihar is a three storey golden pagoda of Lokeshwor (Lord Buddha) built in the 12th century by King Bhaskar Verma. It is located in the courtyard of Kwabahal. Inside the upper storey of the pagoda, placed on the pedestal, are the golden image of Lord Buddha and a large wall and a complete life of Buddha in gold relief. Buddhanath Stupa lies about six km to the east of downtown Kathmandu and is the largest stupa in the Valley. It looms 36 metres high and presents one of the most fascinating specimens of stupa design. Bouddnath, a World Heritage site, is also known as Khasti, or dew drops, after an account that says builders had to use dew to mix the mortar as Kathmandu was suffering from a severe drought during its construction. Overnight at Hotel Himalaya.

Day 10: Depature
Breakfast at hotel. Transfer to the airport