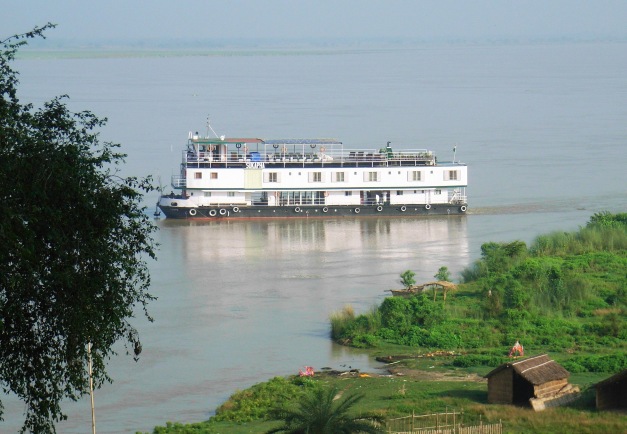 This 10-night cruise covers most of the highlights of Assam, with elephant and jeep safaris looking for rhino in Kaziranga National Park, visits to the old capital of the Ahom kings and to the Hindu monasteries on Majuli Island, walks in tea gardens and through tribal villages.

Day 1. Arrive Dibrugarh, a typical colonial town and major American base in WWII, then drive 2 ½  hrs to Dikhou Mukh and embark on our ship. Alternatively arrive Jorhat airport and drive 1 ½ hrs to Dikhou Mukh. (Dependent on river conditions it may be necessary to board at Neamati, closer to Jorhat).

Day 2. Excursion by road to Sibsagar, the one-time capital of the Ahom kings of Assam. Shan by origin (Assam and Siam share the same derivation) but converted to Hinduism, they ruled Assam for some 700 years until the 1820s, and their culture and architecture is a strange and delightful amalgam of Indian and S.E. Asian. See temples with stupa-like profiles, and palaces of distinctive form – note the crocodiles and rather sexy caryatids that adorn the roof of the Rang Mahal. For the record book, the temple tank here is claimed to be the world’s largest hand-excavated reservoir. Lunch is taken at Horu Charai, a typical tea estate. Return to the ship and cruise for 3 hours down river to Majuli island, supposedly the world’s largest river island.

Day 3. Majuli Island possesses unique hindu monasteries famous for their dance drama performances – the whole island is now shortlisted for future UNESCO World Heritage status. You will visit Auniati  monastery with an eclectic museum  and in the afternoon will attend a dance performance at Kamalabari monastery. Returning to the ship we cruise downstream for an hour or two.

Day 4. A day spent mostly on the river, though we shall stop and make a short visit to a tribal village by the river. By afternoon, Kaziranga National Park will be on our left – wild elephants are sometimes visible from the boat, and once, memorably, a tiger.

Day 5. This morning you will arrive at the little temple town of Vishnath, with a fine Ahom-period temple. Take a walk ashore before continuing the voyage down to a delightful mooring at Silghat, with butterflies abounding in the surrounding jungle. We disembark, and those taking Assam Despatch 4a are transferred to the Kaziranga lodge of their choice (Cruise 4a terminates). Those remaining on board make a first safari through Kaziranga  National Park, taking a jeep ride through its Western Range, with good woodland as well as grassland and wetlands which can be viewed from look-out towers.

Day 6. Disembark pre-dawn and drive to Kaziranga’s Central Range for an early morning elephant ride, the best way to get really close to the rhino. Kaziranga is a World Heritage site, and with a population of over 1000 rhinoceros is the best place in the world to see these beasts. There are also good populations of tiger, wild elephant, sambar, swamp deer, hog deer, wild pig and many other species. After breakfast, walk through terraced tea gardens and visit a village of the Mising tribe. In the afternoon drive to Kaziranga’s little-visited Eastern Range or the newly-opened Burapahar Range for a further jeep safari before returning to the boat.

Day 7. Cruise downstream under the seemingly endless new bridge to dock at Tezpur. (Cruise 4b commences) Those taking Cruise 4b are transferred this morning from a Kaziranga lodge to board the ship at Tezpur in time for lunch. After lunch on board, we visit the remains of the the 6th century Da Parbatia temple, with exquisite carved portal, then board cycle rickshaws to take us through the bazaars to Cole Park with its collection of medieval stone carving. Reboarding our ship we cruise down to moor for the night near the isolated Singri Hill.

Day 8. The day is spent on the river, traversing a lunar landscape of sand islands then closing on the range of hills beyond which lies Guwahati. We should stop for the night not far from Ganesh Pahar.

Day 10. Walk through Sualkuchi to visit weaving workshops and see the whole process of silk manufacture, from cocoon to spinning to dyeing and finally to handweaving into exquisite saris and dress lengths. We then sail up to dock close to the great Saraighat bridge and take a tour of Guwahati, driving up Nilachal Hill to the Kamakhya temple. With its tantric rites and animal sacrifices, the more squeamish may prefer to content themselves with the exterior. Visit the poignant Commonwealth War Graves, the museum and the bazaars.

Day 11. Disembark during the morning and transfer to the airport for final departure.