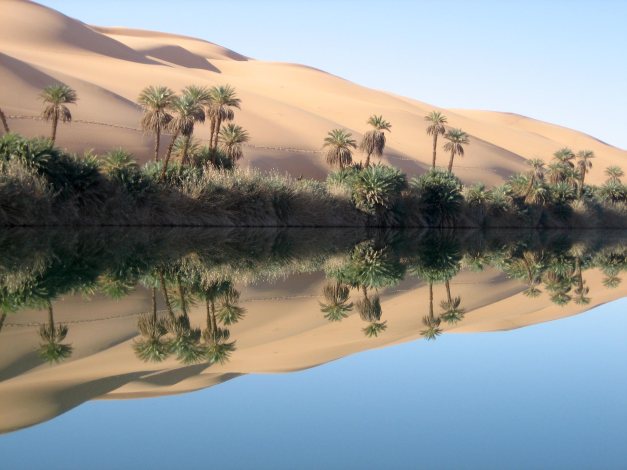 Douz is a stop in many Tunisian Itineraries

Day 1 : Tunis Airport / Gammarth
On arrival at Tunis Airport, and after clearing Customs and Immigration, we will be met by our Tunisian guide who will accompany us on the 15 minutes drive to our hotel in Gammarth.  This luxury hotel is located in a residential area along the northern part of the Bay of Tunis and is about 20 minutes north of the Tunis City Centre.  After checking in this might be the time for us to relax with a pleasant swim in one of the hotel’s two swimming pools or a leisurely stroll along the adjacent beach.  An orientation meeting to discuss the details of our tour will take place in the late afternoon.

Day 2 :Tunis Bardo / Medina / Carthage / Sidi Bou Said
The first full day in Tunisia will see us focus on the heritage and culture of this fascinating country.  For over 3,000 years this country has witnessed the passage of Phoenicians, Romans, Vandals, Byzantines, Turks, Spanish and French.  Each has left a part of its story in stone or mosaics, on the hills of Carthage and the threshold of the Sahara desert.  What better place to start than the Bardo Museum, a 19th Century Palace, in which priceless mosaics have been assembled from all parts of the Tunisian territory and which represent the main eras of Tunisia’s history.  After exploring the shops of the Medina, we’ll have a pleasant lunch and then continue on to Carthage.  This city was founded in the 8th Century BC and is remembered as the city, led by the legendary Hannibal, who dared to brave the might of Rome.  This national monument has an awe-inspiring storehouse of baths, dwellings, amphitheatres, temples, shrines and the famous naval port of the Carthaginians.  We’ll finish our day of Tunisian history in Sidi Bou Said for mint tea or Moorish coffee, in one of its renowned coffee houses, while we scan the Mediterranean for shearwaters, gulls, gannets and cormorants.  This evening we will be driving in to the Tunis Medina where we will have dinner at Essaraya Restaurant.

Day 3 :Tunis / M’hamdia / Thuburbo Majus / Grand Mosque / Kairouan
After breakfast, we will leave our hotel and set out for M’hamdia where we will be on the lookout for lanner, kites, buzzards and eagles.  We’ll continue to the fascinating ruins of Thuburbo Majus, a Berber-Carthaginian settlement long before the Romans arrived.  Later on, we’ll arrive in Kairouan, Tunisia’s oldest Arab city and Islam’s fourth most holy city after Mecca.  Here we’ll visit the Grand Mosque, with its massive buttressed walls, before returning to our hotel.  Hotel la Kasbah is Kairouan’s only topnotch hotel and its fabulous pool in the central courtyard beckons weary travelers.

Day 4 : Kairouan / Bouhedma NP / Tozeur
This morning we will leave for Bouhedma National Park which was formed to protect one of the most delicate ecosystems in the country, the lower steppes.  During the Punic wars, Hannibal used Elephants captured in this region on his mission across the Alps.  Although there are no longer Elephants here, the steppes do harbour numerous species of endangered animals.  Two of the rarest mammals in the world, the Scimitar Oryx and the Addax, have been re-introduced to the park and hopefully we will have a sighting of them.  In addition, we’ll be on the lookout for gazelles, antelopes, ostriches (also re-introduced), land tortoises and monitor lizards that still prosper here.  We’ll take a lunch box with us so that we can spend a good part of the day in the park. In the afternoon, we’ll leave for the oasis at Tozeur in western Tunisia.  We’ll be traveling through an arid land of bare pink hills punctuated by sporadic oasis-villages built around springs and deep gorges.  We’ll be making regular stops along the way as this habitat is rich in small birds.  We’ll be looking for Greater Hoopoe-Lark, Temminck’s Horned Lark and Trumpeter Finch. On our arrival in Tozeur, it soon becomes quite clear that the main attraction of this desert city is its vast oasis.  This oasis covers about ten square kilometres which has been planted with some 200,000 palms and is fed by 200 springs.  After we check in to our hotel, which is quiet with tastefully decorated rooms and a swimming pool, we’ll have some time to do some independent or small group exploration of this very interesting and unique town.  Even the hotel grounds can be alive with such migrants as flycatchers, warblers, nightingales and wheatears.

Day 7 : Douz / Matmata / Medenine / Tataouine
After breakfast, we’ll leave Douz on our way to the southernmost point in our trip, the town of Tataouine.  If anyone of us wants to try an optional camel ride, this will be the time for it and we will stop on the outskirts of the town where these rides are offered.  We’ll continue on the main road to Matmata skirting the edge of a valley that is cultivated using the jessour or terracing method laid out in the wadi beds.  As we follow this new road, we will make stops along the way for such desert species as Cream-coloured Courser, Greater Hoopoe Larks, Hoopoe, Red-rumped Wheatear and Greater and Short-toed Larks. On reaching Matmata, we’ll discover a lunar landscape pocked with craters.  Each of these depressions forms the courtyard for an underground dwelling sometimes as much as 5 – 10m deep.  We’ll visit one of these houses and also a Berber family.  After lunch, we’ll drive on to Medenine where we will be able to visit the well-known ghorfas, or rooms to store grain.  Throughout the south, nomadic Berbers stored their grain in ghorfas, small stone cells. At its peak, Medenine had some 8,000 ghorfas.  With regular stops along the way, we will finally arrive at Tataouine, our destination for the night.

Day 8 : Tataouine / Douiret / Chenini
We’ll continue our exploration of this rugged area, close to the edge of the desert that covers nearly one third of Tunisian territory.  We’ll first visit the remote Dahar village of  Douiret, standing in a magnificent setting of sharply delineated peaks. Its stone buildings and cave homes hang half-way up the steep mountainside and are built around a white mosque.  Afterwards, we’ll reach the village of Chenini, perched on the top of a dizzying ridge, and one of the few Berber-speaking villages still inhabited.  We’ll have a local guide take us along some of the winding paths to visit some of the homes and observe their way of life. We will then spend the afternoon relaxing at our hotel or taking a trip into the town to visit the marketplace.  This hotel has an excellent swimming pool, well-maintained gardens which attract interesting bird life and an amazing night sky, filled with stars.

Day 9 : Thyna / Mareth/ Sfax  / El Jem / Sousse
Today, we will leave the southern town of Tataouine and make our way north to Sousse where we will spend two nights.  Although, this will be mainly a travelling day, we will be making several stops at some very interesting places. The Mareth museum. the saltpans south of Sfax suppport high winter populations of flamingoes, spoonbills, and a variety of herons, egrets, gulls and terns.  There are also good numbers of shorebirds such as stints, dunlin, curlews and godwits.  Some species such as Avocet, Black-winged Stilt and Redshank stay on to breed.  On our way to Sousse, we will have the opportunity to visit the single most impressive Roman monument in Africa, the extraordinary amphitheatre at El Jem. The remains of the amphitheatre, which seated up to 30,000 people, are among the best preserved of its kind – finer than the Coliseum in Rome.

Day 10 : Sousse / Port el Kantaoui
Visit of Sousse down town and souks. Lunch at hotel Kanta. In the afternoon, visit of Lake Hergla and wadi at Sidi Bou Ali. Dinner and overnight at hotel Kanta.

Day 11 : Hergla/ Bouficha / Enfidha / Jedidi/ Zaghouan/ Hammamet
On our way to Hammamet, we will spend time at a freshwater lake and reedbed area near Hergla.  All of the usual wading and waterbirds, including flamingoes, spoonbills, purple gallinule and marbled teal are found here.  Peregrine Falcons and harriers hunt over the area and sometimes large flocks of migrating cranes may be seen.  Hergla is a charming litte fishing port that has some very interesting craft shops scattered around its tiny winding streets. We will also visit  Bouficha,  and the Jedidi Barrage, a lake where we will also be able to seek out some of the Tunisian bird specialties, visit of Zaghouan. Our base for the next two nights will be in Hammamet, a city of 40,000 with a vast beach and an old port, where its lantern fishermen can be seen setting out at night in the shadow of the Kasbah.

Day 12 : Hammamet / Korba / Lebna / Kelibia / Haouaria / Hammamet
On our last full day in Tunisia, we will explore the coast north of Hammamet to the peninsula of Cape Bon Peninsula.  This is a particularly interesting area for, at this time of year, Cape Bon is the final stopover for migrating birds, such as raptors and storks, before they fly over the Mediterranean.  Among these flocks large numbers of birds of prey take shelter in the cliffs that form the farthest tip of the cape.  Thousands of Cory’s Shearwaters may also be seen passing by off shore.  We’ll remain in the area for some time and have lunch at Les Grottes in Haouaria, the most northerly village on the peninsula. In the afternoon, we’ll visit the nearby Roman Quarries where slaves extracted enormous blocks of stone from the rock. These slabs were then taken by sea to neighboring cities.  This quarry supplied the stones for the construction of Punic Carthage.  We’ll return to the hotel in time for a swim and relaxation before our farewell dinner in a restaurant in downtown Hammamet.

Day 13 : Departure Day
This is the end of our tour.  Depending on our flight times, we will be transferred to the Tunis airport for our flights home.  (B)