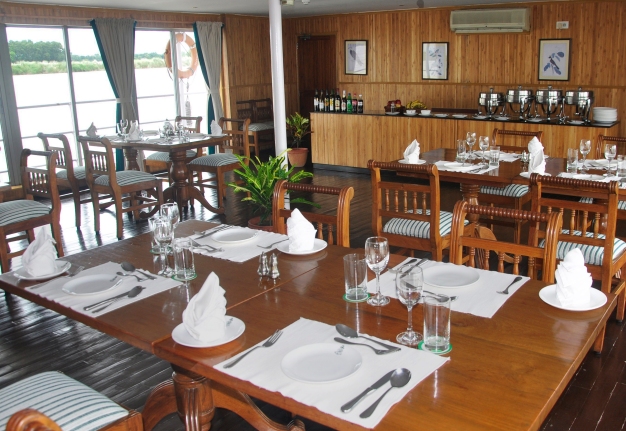 Day 1. Midday 6-8 hr train journey from Calcutta to Farakka, and short road transfer to the ship. Customers joining independently at Farakka can board from midday onwards. For those taking both BD4 and BD5, a full day excursion by road takes you to Gaur. This quiet, deserted place was once one of India’s great cities, first under the Hindus in the 12th century, then as the muslim capital of Eastern India from the 14th to the 16th century. There are plentiful remain of mosques, palaces and gateways. Later travel on through the town of Malda, or English Bazar, to Pandua where you will visit the great 14th century Adina Mosque before returning to Farakka where your ship will have passed through the lock at the barrage.

Day 2. This morning’s cruise is along a straight canal section to Jangipur, where the afternoon is free to explore this small country town on foot. Alternatively, for those taking BD5 only, enjoy a full day excursion by road to Gaur, near the town of Malda, or English Bazar. This quiet, deserted place was once one of India’s great cities, first under the Hindus in 12th century, then as the muslim capital of Eastern India from the 14th to the 16th century. There are plentiful remains of mosques, palaces and gateways and you visit a number of the most interesting before rejoining the ship in the evening near Jangipur.

Day 3. AM set sail down the Hooghly proper, a charming waterway twisting and turning between banks lined with mustard fields and mango orchards. Moor at the delightful sleepy village of Baranagar with three gorgeous miniature terracotta temples to which you walk through the fields. This is rural India at its most idyllic. Continue on down past Azimganj with some fine riverside mansions to Murshidabad where the Nawab’s great Hazarduari Palace, built by an English architect in 1837, dominates the waterfront. Inside are an extensive collection of pictures, china, weapons and other objects. Visit also the great Katra Mosque and drive out to two amazing buildings of the late 18th century, the Nashipara Palace and the Katgola Palace. Both were built in classical Georgian style by rich local merchants and represent the other side of the coin of the “White Moghul” period when English and Indian cultures came close to fusion.

Day 4. Sail downstream a short distance then walk to the Khushbagh, a peaceful Moghul-style garden enclosing the tombs of Siraj-ud-Daulah and his family. Returning to the ship continue downstream past the old British cantonment of Berhampur to a rural mooring close to the battlefield of Plassey where in 1757 Clive’s defeat of Siraj-ud-Daulah changed the course of Indian history – you can walk through the fields to the commemorative obelisk. Cruise on to a mooring near Katwa, a market town with narrow bustling bazaars.

Day 5. AM visit the brassworking village of Matiari where you can see the whole primitive process of beating out brass water pots and other vessels. Later we reach Mayapur, its skyline dominated by the vast new ISKCON temple which we are able to visit.

Day 6. Continue on down to the country town of Kalna. Here we take cycle rickshaws to see a group of some of Bengal’s most attractive terracotta temples, as well as the unique Shiva temple with concentric rings made up of 108 shrinelets. Sail on, leaving fields behind and arrive at the outskirts of Calcutta. Land near Bandel to visit the imposing Imambara.

Day 7. Sailing on downstream past fine waterfront buildings and the old Dutch settlement at Chinsura you land at Chandernagore, a French possession until 1950, and visit the 18th century church and Dupleix’s House containing a small museum. Continue down to Barrackpore, land and take a walk through the cantonment past the Semaphore Tower, Government House, the Temple of Fame, and Flagstaff House, its garden housing many of the British statues removed from central Calcutta. Sail on up to Bali Bridge.